The swirling skies of Vincent Van Gogh's Starry Night illustrate a mystery that has eluded biologists for more than a century—why do we perceive the color blue in the dimly lit night sky? A newly discovered mechanism of color vision in mice might help answer this question, Caltech researchers say.

The work, which was done in the laboratory of Markus Meister, Anne P. and Benjamin F. Biaggini Professor of Biological Sciences, will be published on April 14 in the print edition of the journal Nature.

In humans, vision is enabled by two types of light-sensitive photoreceptor cells called rods and cones. When these photoreceptors detect light, they send a signal to specialized neurons in the retina called retinal ganglion cells, or RGCs, which then transmit visual information to the brain by firing electrical pulses along the optic nerve.

A standard biology textbook would likely explain that vision in dim light is enabled by rods—sensitive light detectors that are only capable of producing black and white vision. Color vision, on the other hand, is enabled by cones, which are active in bright light. Humans have three types of cones, and each cone contains a different light-sensitive chemical, or pigment, that reacts to different colors, or wavelengths, of light. We have red-, green-, and blue-sensitive cones, and the brain perceives color by comparing the different signals it receives from nearby cones of each type.

To explore whether or not there were other modes of color vision, Meister and his team studied another mammal: the mouse. Previous behavioral studies indicated that mice are indeed capable of some form of color vision. As in humans, that vision is dependent on light signals picked up by cones. Mice have two types of cones—one that is sensitive to medium-wavelength green light and one that is sensitive to short-wavelength ultraviolet light (UV).

"The odd thing about the mouse is that these two kinds of cones are actually located in different parts of the retina," Meister says. "Mice look at the upper part of the visual field with their UV cones and the lower part with their green cones. We wanted to know how a mouse perceives color when any given part of the image is analyzed with only one cone or the other cone—meaning the brain can't compare the two cone signals to determine a color."

The researchers discovered that a certain type of neuron in the mouse retina, called a JAMB retinal ganglion cell (J-RGC), was critical. These J-RGCs can signal color to the brain because they fire faster in response to green light and stop firing in response to ultraviolet light. Curiously, the J-RGCs were turned on by green light even in the upper part of the visual field, which contained no green cones.

Through additional experiments, Meister and his team discovered how the J-RGC compares signals from the ultraviolet cones to signals from rods, which are also sensitive in the green part of the spectrum. This revealed, for the first time, an essential antagonistic relationship between the rods and the cones of the retina. Rods excite a neuron called a horizontal cell, which then inhibits the ultraviolet cones.

Meister and his colleague, first author Maximilian Joesch from Harvard University, wanted to determine how this color vision system would be helpful to a mouse in its natural environment. To find out, they fitted a camera with filters that would replicate the wavelengths detected by the mouse rods and cones and used it to take images of plants and materials that a mouse might encounter in nature.

Their photographic scavenger hunt yielded two materials—seeds and mouse urine—that were much more visible through the mouse's green and ultraviolet system than through human color vision. The researchers speculate that because mice need seeds for sustenance and use urine for social communication—via "urine posts," a form of territorial marking—they might use this mechanism to find food and spot neighbors.

Meister says there is reason to believe that this same pathway—from rods to horizontal cells to cones—is responsible for the human perception of the color blue in dim light. In the human retina, the horizontal cell preferentially inhibits the red and green cones, but not the blue cones.

"In really dim light, our cones don't receive enough photons to work, but they continue to emit a low-level baseline signal to the rest of the retina that is independent of light," he explains. "The rods are active, however, and through the horizontal cell they inhibit both the red and green cones. Because this baseline signal from the red and green cones is suppressed, it looks like the blue cones are more active. To the rest of the retina, it seems like everything in the field of vision is blue."

So, perhaps Van Gogh's color choice for the night sky was a biological decision as well as an artistic one. "Color has intrigued scientists, artists, and poets throughout human civilization. Our paper adds to the understanding of how this quality of the world is perceived," Meister says.

Meister's work was published in a paper titled "A neuronal circuit for color vision based on rod-cone opponency." Funding for the work was provided by the National Institutes of Health and The International Human Frontier Science Program Organization. 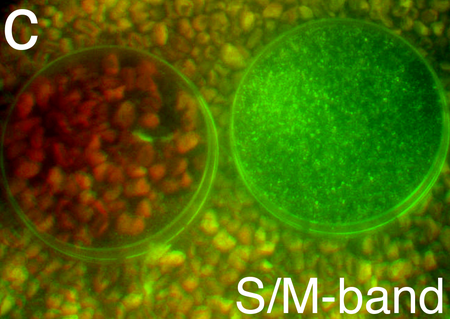 How a mouse might experience color. On a background of clean mouse bedding are two dishes containing bedding soiled with urine (left) and a mix of plant seeds (right). Ultraviolet in this scene (UV, invisible to human observers) is rendered in green, and green in the scene is rendered in red. The plant seeds reflect UV light, whereas urine absorbs it. Credit: M. Meister Laboratory/Caltech
Image Lightbox 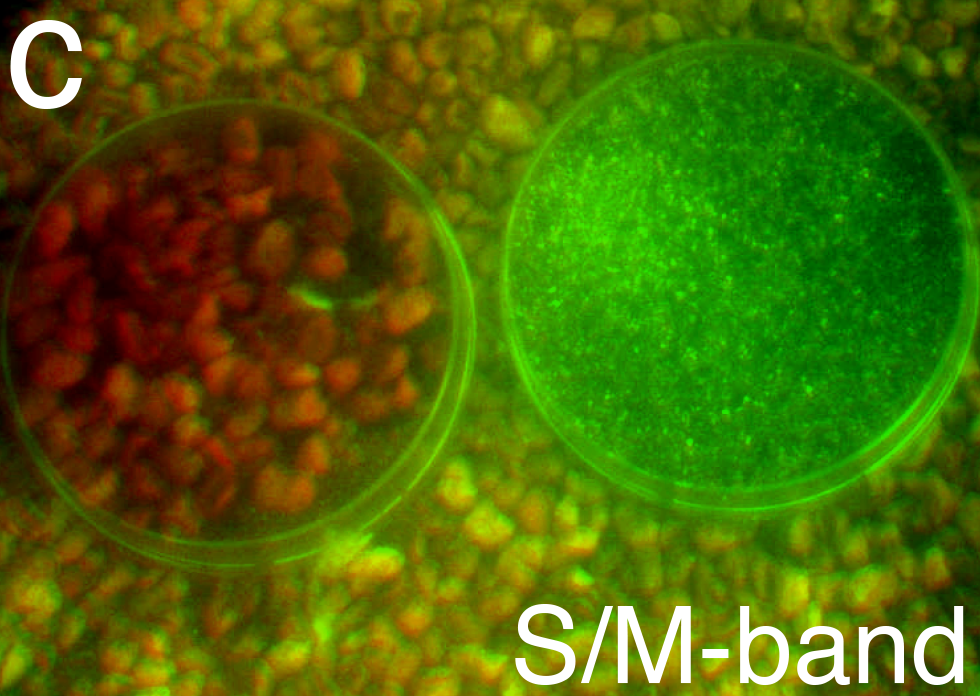 How a mouse might experience color. On a background of clean mouse bedding are two dishes containing bedding soiled with urine (left) and a mix of plant seeds (right). Ultraviolet in this scene (UV, invisible to human observers) is rendered in green, and green in the scene is rendered in red. The plant seeds reflect UV light, whereas urine absorbs it.
Credit: M. Meister Laboratory/Caltech
Download Full Image
Subscribe
The Caltech Weekly