Skip to main content
Home  /  About  /  News  /  Medicine of the Future: New Microchip Technology Could Be Used to Track Smart Pills

Medicine of the Future: New Microchip Technology Could Be Used to Track Smart Pills

Researchers at Caltech have developed a prototype miniature medical device that could ultimately be used in "smart pills" to diagnose and treat diseases. A key to the new technology—and what makes it unique among other microscale medical devices—is that its location can be precisely identified within the body, something that proved challenging before.

A paper describing the new device appears in the September issue of the journal Nature Biomedical Engineering. The lead author is Manuel Monge (MS '10, PhD '17), who was a doctoral student in Emami's lab and a Rosen Bioengineering Center Scholar at Caltech, and now works at a company called Neuralink. Audrey Lee-Gosselin, a research technician in Shapiro's lab, is also an author.

Called ATOMS, which is short for addressable transmitters operated as magnetic spins, the new silicon-chip devices borrow from the principles of magnetic resonance imaging (MRI), in which the location of atoms in a patient's body is determined using magnetic fields. The microdevices would also be located in the body using magnetic fields—but rather than relying on the body's atoms, the chips contain a set of integrated sensors, resonators, and wireless transmission technology that would allow them to mimic the magnetic resonance properties of atoms.

"We wanted to make this chip very small with low power consumption, and that comes with a lot of engineering challenges," says Emami. "We had to carefully balance the size of the device with how much power it consumes and how well its location can be pinpointed."

The researchers say the devices are still preliminary but could one day serve as miniature robotic wardens of our bodies, monitoring a patient's gastrointestinal tract, blood, or brain. The devices could measure factors that indicate the health of a patient—such as pH, temperature, pressure, sugar concentrations—and relay that information to doctors. Or, the devices could even be instructed to release drugs.

"You could have dozens of microscale devices traveling around the body taking measurements or intervening in disease. These devices can all be identical, but the ATOMS devices would allow you to know where they all are and talk to all of them at once," says Shapiro. He compares it to the 1966 sci-fi movie Fantastic Voyage, in which a submarine and its crew are shrunk to microscopic size and injected into the bloodstream of a patient to heal him from the inside—but, as Shapiro says, "instead of sending a single submarine, you could send a flotilla."

The idea for ATOMS came about at a dinner party. Shapiro and Emami were discussing their respective fields—Shapiro engineers cells for medical imaging techniques, such as MRI, and Emami creates microchips for medical sensing and performing actions in the body—when they got the idea of combining their interests into a new device. They knew that locating microdevices in the body was a long-standing challenge in the field and realized that combining Shapiro's knowledge in MRI technology with Emami's expertise in creating microdevices could potentially solve the problem. Monge was enlisted to help realize the idea in the form of a silicon chip.

"This chip is totally unique: there are no other chips that operate on these principles," says Monge. "Integrating all of the components together in a very small device while keeping the power low was a big task." Monge did this research as part of his PhD thesis, which was recently honored with the Charles Wilts Prize by Caltech's Department of Electrical Engineering.

The final prototype chip, which was tested and proven to work in mice, has a surface area of 1.4 square millimeters, 250 times smaller than a penny. It contains a magnetic field sensor, integrated antennas, a wireless powering device, and a circuit that adjusts its radio frequency signal based on the magnetic field strength to wirelessly relay the chip's location.

"In conventional MRI, all of these features are intrinsically found in atoms," says Monge. "We had to create an architecture that functionally mimics them for our chip." 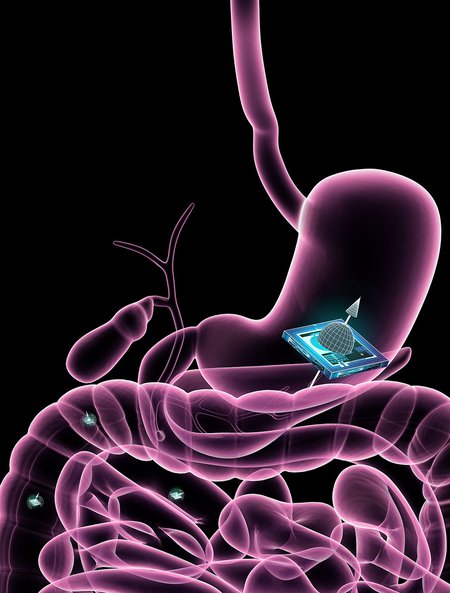 Illustration of an ATOMS microchip localized within the gastrointestinal tract. The chip, which works on principles similar to those used in MRI machines, is embodied with the properties of nuclear spin. Credit: Ella Marushchenko for Caltech 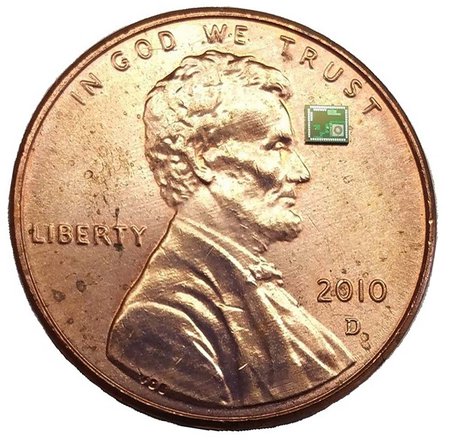 The ATOMS device seen next to a penny. The device has a surface area of 1.4 square millimeters, 250 times smaller than a penny. Credit: Shapiro and Emami Labs/Caltech
Image Gallery Lightbox 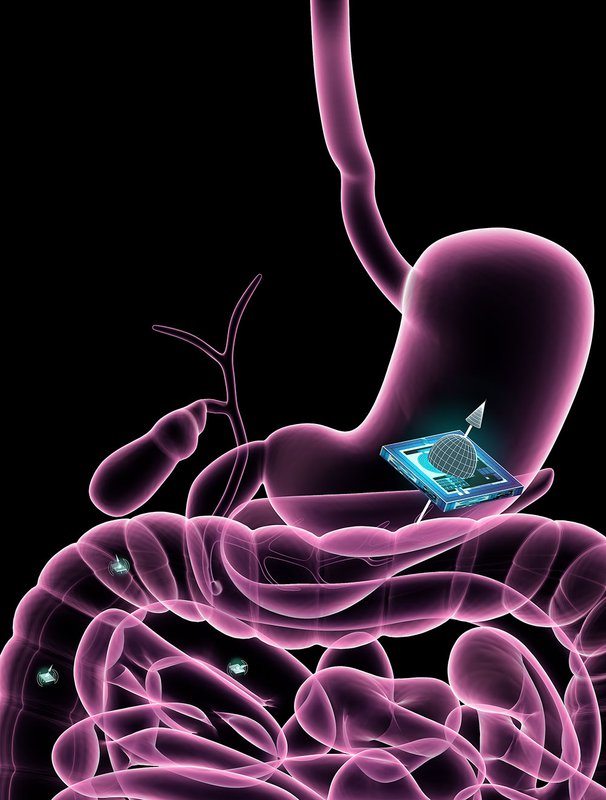 Illustration of an ATOMS microchip localized within the gastrointestinal tract. The chip, which works on principles similar to those used in MRI machines, is embodied with the properties of nuclear spin.
Credit: Ella Marushchenko for Caltech
Download Full Image 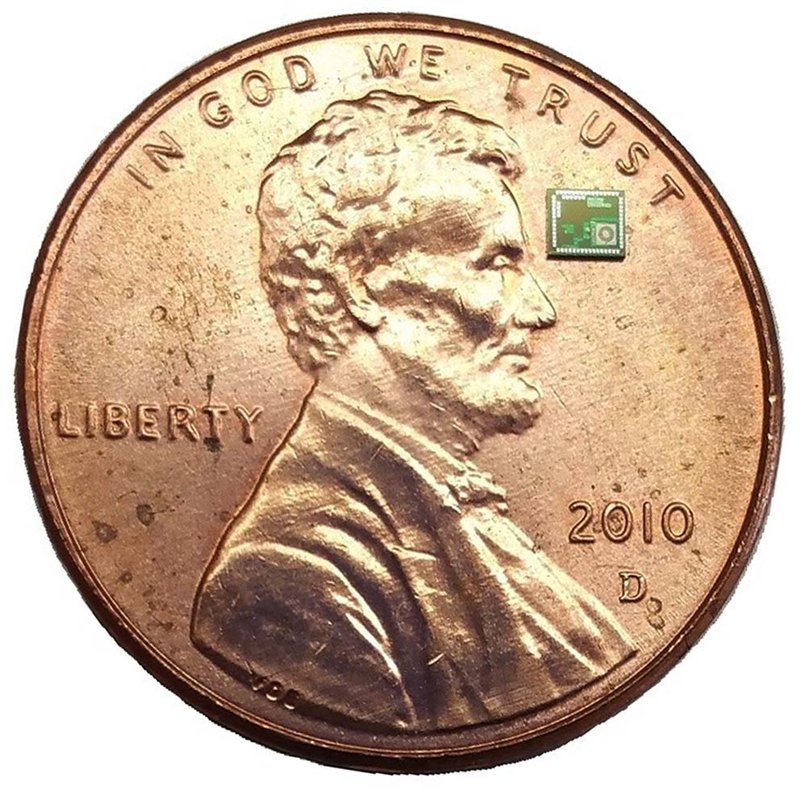 The ATOMS device seen next to a penny. The device has a surface area of 1.4 square millimeters, 250 times smaller than a penny.
Credit: Shapiro and Emami Labs/Caltech
Download Full Image