A Caltech-led team of researchers has discovered that a small-molecule metabolite, produced by bacteria that reside in the mouse gut, can travel to the brain and alter the function of brain cells, leading to increased anxiety in mice. The work helps uncover a molecular explanation for recent observations that gut microbiome changes are associated with complex emotional behaviors.

The research was conducted primarily in the laboratory of Sarkis Mazmanian, Luis B. and Nelly Soux Professor of Microbiology and affiliated faculty member with the Tianqiao and Chrissy Chen Institute for Neuroscience at Caltech. A paper describing the study appears on February 14 in the journal Nature.

Decades of research have shown that the communities of bacteria that inhabit the intestines of animals (the microbiome) influence the immune system and metabolism; studies in the last few years have linked the microbiome to brain function and mood. People with certain neurological conditions have distinctly different gut bacteria communities. Further, studies in mice have shown that manipulating these communities can alter neurodevelopmental and neurodegenerative states, either ameliorating or exacerbating symptoms.

"It's been really difficult to show causation between something that's happening in the gut and the brain, rather than just associations between the disease states and the presence or absence of certain microbes," says Brittany Needham, first author of the new study and a postdoctoral scholar in the Mazmanian lab. "We were interested in trying to understand the molecular messages that are going between the gut and the brain, and how these signals may lead to changes in behavior."

This study focused on a bacterial metabolite (a by-product of microbes) called 4-ethylphenyl sulfate, or 4EPS. Initially produced by microbes in the intestines, 4EPS is then absorbed into the bloodstream and circulates throughout the body in both humans and mice. In 2013, the Mazmanian lab showed that this particular molecule was present in higher levels in mice with altered neurological development, specifically, a mouse model of autism and schizophrenia. Though other aspects of the altered microbiome differed from the healthy microbiome, 4EPS levels were by far the most different. Additionally, in a screen of human blood samples from 231 individuals, 4EPS levels were about seven times higher in children on the autism spectrum than in neurotypical children.

In this work, the team focused on the effects of 4EPS on mouse models of anxiety. While anxiety disorders in humans are complex, animal models provide a way to study the precise changes in the brain and body that lead to anxious behaviors. "Anxiety" in mice is measured by their willingness to explore or hide in a new space as well as the time spent in a risky environment. Bold mice will explore a new space, sniffing around, but anxious mice will hide, as if facing a predator, instead of exploring.

The mice with 4EPS spent much less time exploring the area and more time hiding as compared to their non-4EPS counterparts, indicating higher levels of anxiety. Brain scans of the 4EPS mice also showed that some of the brain regions associated with fear and anxiety were more activated in addition to overall changes in brain activity and functional connectivity.

Looking closer at brain cells within these altered regions, the team found that particular cells called oligodendrocytes were altered. These cells are important in part because they produce a protein called myelin, which acts as a protective coating around neurons and nerve fibers called axons, like insulation around an electrical wire. The team found that in the presence of 4EPS, oligodendrocytes are less mature and consequently produce less myelin, leading to thinner insulation around axons.

However, when the 4EPS mice were treated with a drug known to increase myelin production in oligodendrocytes, the drug was able to overpower the negative effects of 4EPS—the mice regained normal myelin production, and the anxious behaviors were reduced.

In a related study appearing simultaneously in the journal Nature Medicine, Needham showed that treating mice with an oral drug to soak up and remove 4EPS from their systems led to reductions in anxious behaviors. This result enabled a small clinical study that also gave humans the drug in an open-label trial (no placebo or control group). Sequestering 4EPS in the human gut led to reduced levels of 4EPS in the blood and urine, and many of the 26 study participants displayed overall decreased levels of anxiety.

"It's an exciting proof-of-concept finding that a specific microbial metabolite alters the activity of brain cells and complex behaviors in mice, but how this is happening remains unknown," says Mazmanian. "The basic framework for brain function includes integration of sensory and molecular cues from the periphery and even the environment. What we show here is similar in principle but with the discovery that the neuroactive molecule is of microbial origin. I believe this work has implications for human anxiety or other mood conditions."

The next steps for the work are to examine the mechanisms through which 4EPS affects oligodendrocytes—which proteins it may be interacting with, whether 4EPS is affecting changes directly in the brain, or if it is affecting another part of the body and those effects are making their way up to the brain. Also, it will be critical to show that the human data have an effect in a well-powered and controlled clinical trial, which is now underway.

The paper is titled "A gut-derived metabolite alters brain activity and anxiety behaviour in mice."

Funding was provided by the Center for Environmental Microbial Interactions, the National Science Foundation, the Human Frontier Science Program, the National Institutes of Health, the Ministry of Science and Technology in Taiwan, the Heritage Medical Research Institute, and Lynda and Blaine Fetter. Sarkis Mazmanian is co-founder of Axial Therapeutics, which conducted the clinical trial. 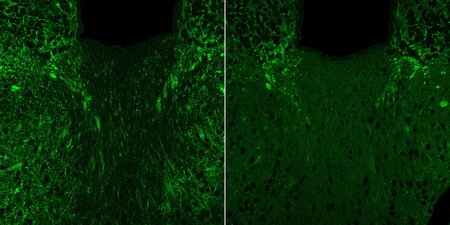 Left: Image of a mouse brain with normal myelin production (myelin stained in green). Right: in the presence of 4EPS, myelin production is stunted and these mice show anxiety-like behaviors. Credit: B. Needham
Image Lightbox

Red lines indicate the paths a mouse took. Left: Mice without 4EPS explore the entirety of a new arena. Right: In the presence of 4EPS, mice stick only to covered regions of a new arena, indicating fearfulness or anxiety. Credit: B. Needham 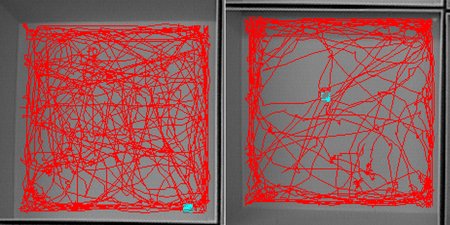 Red lines trace the paths a mouse took throughout a space. Left: The mouse explores the entirety of the arena equally. Right: The mouse, in the presence of 4EPS, sticks primarily to the walls of the arena. Credit: B. Needham
Image Lightbox
Subscribe
The Caltech Weekly